The linkage of ubiquitin monomers or polymers is a reversible post-translational modification regulating protein activity, endocytosis, or degradation by either the proteasome or the autophagy pathway. We are interested in deciphering the role of ubiquitin specific proteases (USPs) in the regulation of host responses -such as immune signaling and autophagy activation- to pathogens. We also develop drug screening strategies for modifying their activity in human cells. We previously selected UBPY (syn. UUSP8) as a crucial actor of autophagy from a systematic RNA interference screen in Drosophila fruit flies.

The present project aims at (1) deciphering UBPY function in immune receptor endocytosis and autophagy regulation using both cell biology and Drosophila genetics approaches, (2) describing the mechanisms and function of UBPY and ESCRT-III proteins interaction at the structural and cellular levels, (3) searching for chemicals inhibiting UBPY activity.

One two-year Post-doctoral fellow and accompanying bench fees supported by this grant from January 2015. 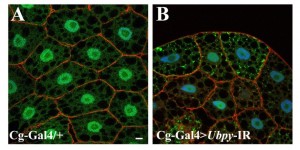 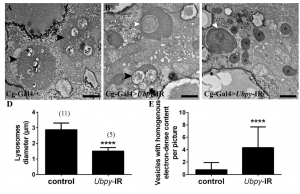