Both pathogenic and non-pathogenic bacteria deploy molecular weaponries to invade and colonize host eukaryotic cells or to compete with other bacteria within a microenvironment of the host organism. This project focuses on secretion systems (T2SS, T3SS, T6SS) of pathogens such as Pseudomonas aeruginosa. Understanding the regulation of these systems as well as function and characterization of the role of individual components of these molecular machineries is essential for the design of efficient therapeutics targeting virulence factors of a number of pathogens.

One of the goals of this project is to describe the function of novel – or yet uncharacterized – components of T3SS and T6SS apparatus of P. aeruginosa, including structural and regulatory components and secreted toxins, in order to better understand the underlying mechanisms of P. aeruginosa pathogenesis. Several new protein interactions have recently been identified in our laboratory within each of the two secretion systems using biochemistry and proteomics approach. However, the subcellular localization and function of these protein interactions in context of the (live) cell and kinetics of these interactions during physiological changes that occur during T3SS or T6SS activation remain largely unknown. To address this we are developing robust and quantitative microscopy-based imaging assays to analyze individual T3SS/T6SS components of P. aeruginosa on single-cell level and to describe dynamics of T3SS/T6SS gene expression and syringe assembly within entire bacterial populations. Electron microscopy and fluorescence time-lapse microscopy are being used followed by semi-automated image segmentation for quantitative analysis.

The second objective of this project involved the structural characterization of the apparatus itself. This effort counted on a collaboration with the electron microscopy group at the PSB (Schoehn group). In order to tackle this issue, we chose to study the secretin, the outer membrane ring-forming protein that is common to a number of secretion systems and plays key roles in cytotoxicity. In addition to being funded by GRAL, this work was also funded by an ANR project (SECRETIN) in collaboration with the Pasteur Institute. 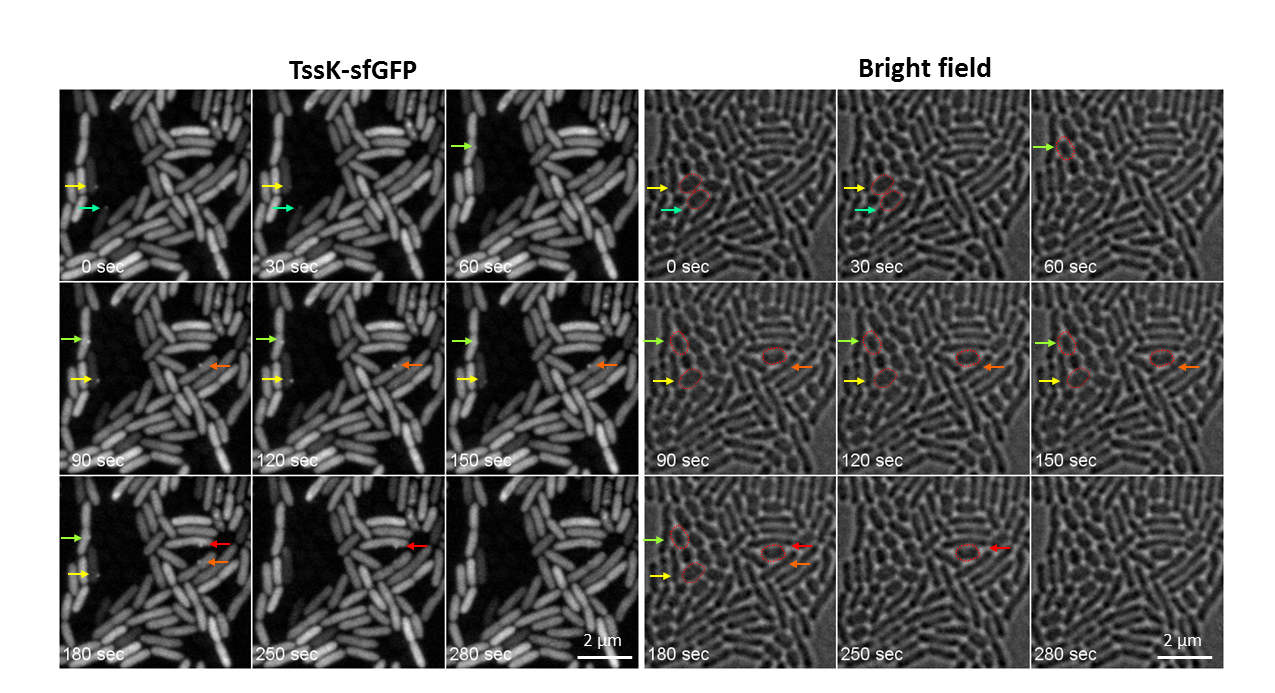 Figure 1 : T6SS deployment in mixed bacterial population of PAO1 (wild type) and Acinetobacterbaumanni: Time-lapse imaging of live PAO1 cells expressing TssK-sfGFP under inducible promotor and grown for 1hr in mixed culture with Acinetobacterbaumanni. Selected frames are shown from a time-lapse imaging of live cells (TssK-sfGFP fluorescence on left, bright field on right), 30 sec between frames, Mag. 160x. Assembly of TssK-sfGFP spots in PAO1 cells occurs towards the contact with prey cell (A. baumanni). Assembly-disassembly of individual TssK-spots is indicated by color-coded arrows. Targeted prey cells of A. baumanni are encircled in red in corresponding bright field images (right panel)